Growing up in southern Texas there’s a couple things mama always cooks on Sunday, one of them being chicken friend steak. The ultimate in southern comfort food, something fried and covered in gravy. Making this southern classic dish vegan only takes three ingredients and about 30 minutes. 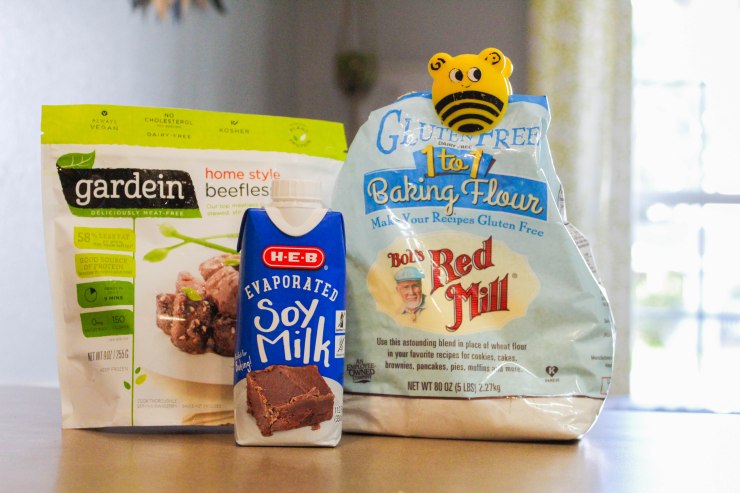 I used gluten free flour because it’s what I had on hand, but it’s not a requirement since the beefless tips already contain gluten. The evaporated soy milk  I found at our local HEB and it’s a great thick replacement for doing an egg wash which you would typically do for chicken fried steak. It does have a slightly sweet taste, but it’s not noticeable in the finished product. The milk is what holds the flour onto the steak so it’s better if it is thick which is why I like the evaporated soy milk. If you can’t find it no worries use any vegan milk, the recipe will still work.

Start off by defrosting your Gardein Beefless Tips

until they are soft. Now here’s the fun and messy part, the batter. Take two separate shallow dishes add 1 cup of Flour

with 1tbsp pepper and 1 tsp salt mixed in to one bowl and half of the evaporated soy milk in another bowl. place the beefless tips into the milk, then to the flour, then repeat. Now you have a them double battered which means more fried yumminess! Do not throw away your milk or flour just yet, we will use it for the gravy.

Once you have double battered your steak it’s time to fry.  Cover the bottom of your skillet (I prefer Cast Iron but any skillet will do) with a high heat Oil.  The amount oil depends on the pan size but I usually add enough to be a 1/4 inch from the bottom. You can always add more if needed. Heat your oil over medium-high heat until it’s hot enough to start frying the battered steak. To test the oil I place a side of the steak in the oil and if it starts frying immediately I know it’s good. You could also put a little bit of the leftover batter in to see. Fry each piece for 3-5 minutes until golden brown before flipping, otherwise your batter may come off. Once each side is golden brown place onto a paper towel or cooling rack to allot the oil drain away and not leave them soggy.

After each piece has fried it’s time to make the gravy. See all those bits or left over batter in your skillet? That’s what gives the gravy it’s amazing flavor so don’t throw it away! The amount of oil left in your pan should be just barely covering the bottom at this point. You will start to add the milk that was leftover from the battering first, then the remainder of the milk from the can (about a half cup). When you add the milk to the oil you need to whisk vigorously until the oil and milk are combined and not separated. If there is a lot of oil on top whisk in 1/4 cup of any milk at a time until there is no oil separated from the milk.  It should look like this… 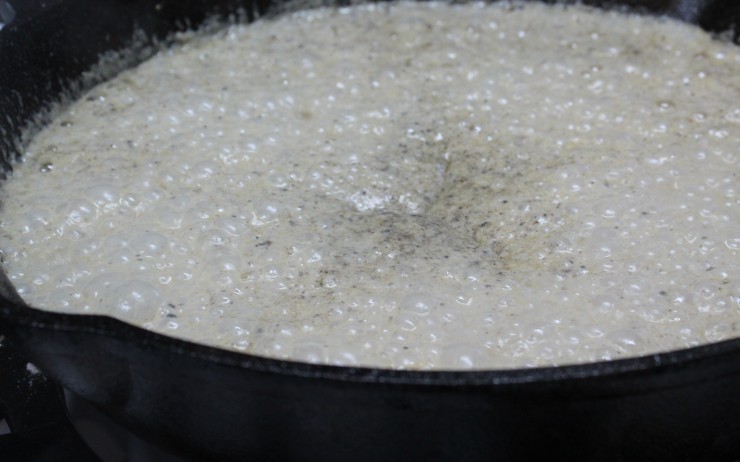 So now that you are well on your way to a delicious gravy, keep whisking and add 2 tsp black pepper, 1 tsp salt, and the left over flour from the dish you used for battering the steak. The flour will help to thicken the gravy but it does need to be whisked vigorously to prevent lumps. If you continue to notice your gravy isn’t getting thick after several minutes go ahead and add a tbsp more flour and mix it in. Wait for another minute or two because the reaction isn’t instantaneous, continuing to whisk. Repeat with 1 tbsp at a time until it thickens. Once your gravy is thick and darker in color it’s ready to eat. Remove it from the heat.

Now all that’s left to do is eat yall! If you want a little bit of added country make some rice and smother that in gravy too, YUM!!! 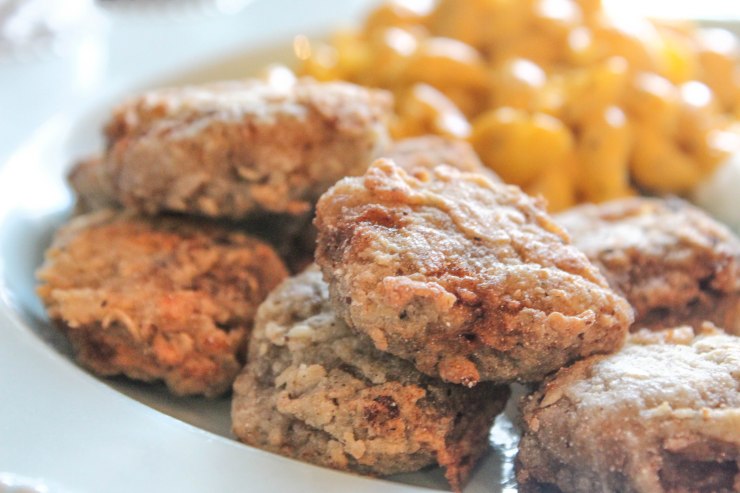 I sincerely hope yall enjoy this recipe and if you have any questions let me know! Don’t forget to follow me to keep up to date on my posts and get new recipes!